Yesterday evening we tried to solve a problem a fellow wetplate photographer had.
No matter what she tried, her plates were always fogged.
I had the same problems when I started and I can tell you : that is so frustrating!!!!
Trying to solve that problem, i made dozens of plates almost without any help and never was able to solve it.

So we tried to make several plates last night.
The best thing to do is start right from the beginning.
Flow a plate, sentisize it and directly after that, develope that plate without leaving the darkroom.
When your silverbath and developer is ok your plate should look like the right one. So it must be "totally" clear. As you can see the left plate looks muddy or fogged (although I have seen them worse !)

We were glad we found the problem so fast. To find a solution for such a problem you need help from outside otherwise it can take days or weeks  and lots of wasted chemicals. 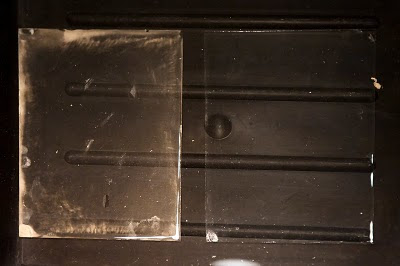 How "The Alien" was made

Following is a brief explenation how "The Alien" was made.
Currently I am using 2 falconeyes studiolights 5500k with 9 bulbs each.
This picture was made with a noname petzval lens.
focallenght was 350 mm at 5.6
poorboy collodion
exposuretime aprox 4 sec
clear glass
KCN fixer. 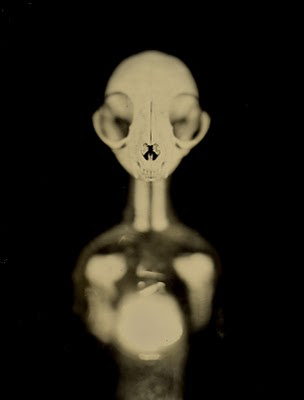 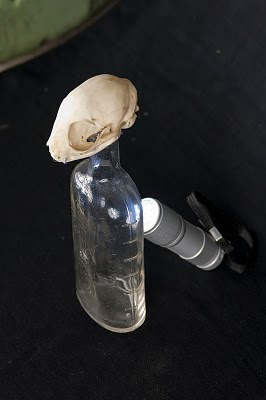 a little flashlight from behind to create a body 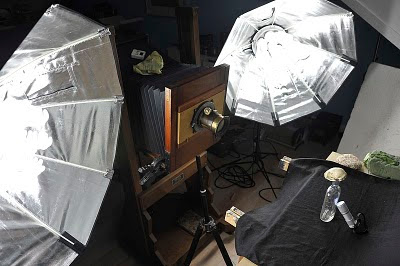 It's a fact. We had our first collodionday.
We were invited at Jeroen de Wijs his parents house. Beautiful house with even a more beautiful garden. First i would like to thank Jeroen and his parents inviting me and for hosting that really nice event.
As you can see we enjoyed the beautifull weather and had great fun. We tried many camera's and lenses and we even made some nice plates. At the end we were invited for a very nice barbeque and drunk champagne.
We had a great time !! 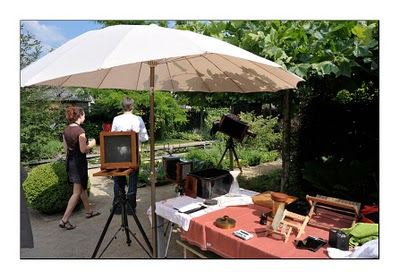 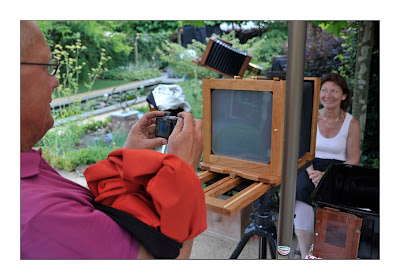 Posing for a digital picture ! 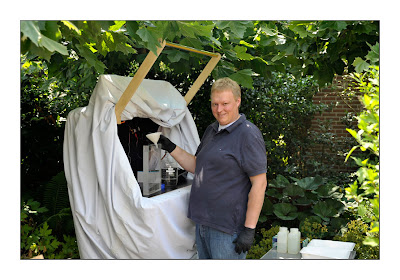 Jeroen standing next to his mobile darkroom.

The camera I currently use, is an approx 80 years old belgium Narita oak studio camera.
Max. plate-size is approx 30 x 30 cm.
Max. extension is about 120 cm which makes it suitable for long lenses also. 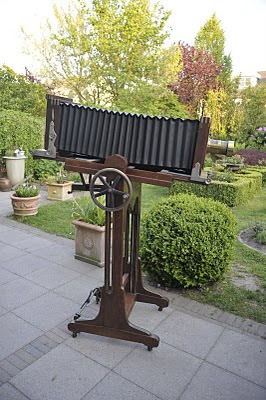 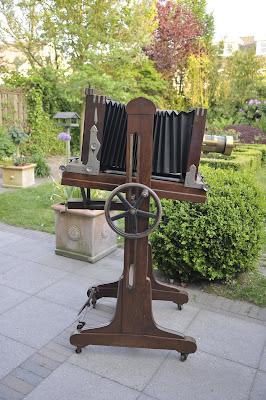 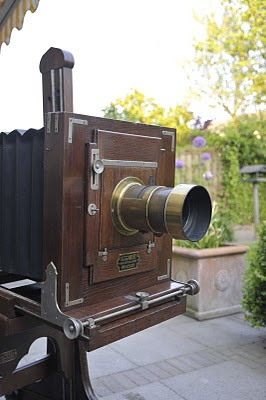 An English sculptor and photographer, Fredrick Scott Archer, invented Collodion photography in 1851.
He experimented with collodion in the hope of producing a photographic positive on ordinary glass plates.
Collodion, a thick and syrupy liquid, is made by dissolving nitrated cotton in a mixture of alcohol and ether.
It was widely used by surgeons as a liquid bandage owing to its strength and adhesion.

In 1851, Archer used collodion to hold light-sensitive salts to his glass plates.
Once the salts, such as potassium iodide, were in the mixture of collodion, the viscous liquid was poured onto the plate.
Allowing the alcohol and ether to evaporate, a thin film containing the necessary iodides was left on the plate.
Ready for sensitizing, the plate was placed in a bath of silver nitrate.
This formed a light sensitive compound of silver iodide on the surface of the plate.

Once sensitized, the plate was exposed in the camera before the collodion began to set and dry.
If the plate dried before development,it would have had practically no sensitivity and would be therefore useless.
For this reason alone, the process Archer invented became known as "Wet Plate" collodion process.