Tintypes, millions have been made

Recently I had a nice chat with some talented wet platers.
We discussed why tintypes were so popular in the 19th century and how come there are so many left of those beautiful pictures.
Well the simple answer is: millions were made.
See the enclosed picture which I recently received from Mark Osterman.
http://www.collodion.org/

The picture shows a part of the Scarborough beach somewhere in England around 1855.
On that part of the beach, which is not bigger than a few hundred meters,
you can see about 6-7 photographers making tin types.
That claims it was extremely popular at that time. 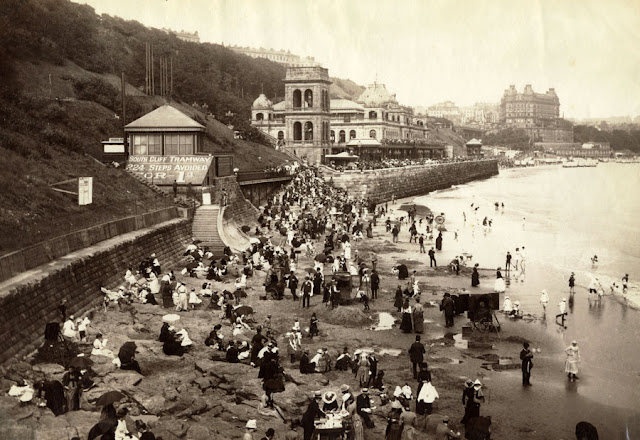 From Wikipedia:
“Tintype, also melainotype and ferrotype, is a photograph made by creating a direct positive on a sheet of iron metal that is blackened by painting, lacquering or enamelling and is used as a support for a collodion photographic emulsion
Photographers usually worked outside at  fairs, carnivalss etc. and as the support of the tintype (there is no actual tinused) is resilient and does not need drying, photographs can be produced only a few minutes after the picture is taken.
An ambrotype uses the same process and methods on a sheet of glass that is mounted in a case with a black backing so the underexposed negative image appears as a positive. Tintypes did not need mounting in a case and were not as delicate as photographs that used glass for the support.”
The process was first described by Adolphe-Alexandre Martin in France in 1853, patented in 1856 both in the United States by Hamilton Smith and William Kloen in the United Kingdom It was first called melainotype, then ferrotype by a rival manufacturer of the iron plates used; finally tintype.
Ambrotype as a precursor
The  ambrotypewas the first use of the wet-plat Collodion Process as a positive image. Such collodion glass positives had been invented by Frederic Scott Archerin 1851 and the name Ambrotype was introduced in the United States by james Ambrose Cuttingin 1854 when he patented a variation on Archer's original process.

The tintype process became very popular in United States particularly during the Civil War They continued to enjoy significant use throughout the 19th century for inexpensive portraits, particularly by street photographers

Tony Richards forwarded me this picture. It shows the same spot at about the same period.